Gi vs No Gi BJJ: The Great Debate (Solved!)

In the world of BJJ, one of the most common and classic debates is Gi or NoGi.

If you’re a BJJ practitioner then you know how heated this debate can get. Though neither is better than the other in my opinion, you can see that both have their distinct pros and cons.

In general, there are very different opinions about this matter in different schools. Some experts say that Gi is better, and more practical for self defense, and you can do all the Gi based techniques as well, whereas on the other hand, some say that No-Gi is better because it is more practical, and allows for an easier transition into MMA.

Either way, you should be able to form your own opinions, and to help you with that, today, I am going to try and answer all your burning questions about the Gi vs No-Gi debate.

What is the difference between Gi and No-Gi BJJ?

To start off, the obvious difference between Gi and No-Gi Brazilian Jiu-Jitsu is the clothing aspect. Gi Jiu-Jitsu is done in a traditional Gi, which is used to perform various techniques. Moreover, grabbing the Gi for leverage and control is allowed which really changes up the game.

On the other hand, No-Gi Jiu-Jitsu is done without a traditional Gi, and grabbing your opponent’s clothes is not allowed. In NoGi grappling. Most people wear a rash guard and shorts.

However, there are many other differences between Gi and No-Gi Jiu-Jitsu, which are further explained below.

Apart from the obvious difference in clothing, the training for Gi and No-Gi Jiu-Jitsu can also be different. Generally, No-Gi training is much more paced, because controlling each other is more difficult. Unlike Gi Jiu-Jitsu where you can grab the lapel of your opponent’s Gi, and use other Gi-based grips to control your opponent.

In addition to the speed aspect, there are also several techniques that are specific to each form of training. For instance, in Gi Jiu-Jitsu, there are many submissions that can be executed using your training partners Gi, and such submissions are not possible in No-Gi.

On the other hand, while training without a Gi, there is a larger focus in wrestling, and pulling guard isn’t that common, since it is more difficult to control a person from the bottom when you don’t have the Gi to grip on.

You’ve probably heard that BJJ allows smaller and weaker fighters to subdue larger and physically stronger opponents. Well, this is more true for Gi than No-Gi. When you are training or competing in Gi, controlling heavier opponents becomes easier, because of the grips that can be done with the Gi allows for more leverage points and more submissions.

Conversely, in No-Gi, strength, and size plates are a very important part, because controlling them becomes more challenging. Furthermore, finishing submission in No-Gi is also more challenging even from dominant positions. Where you would be completely comfortable with a heavier opponent in your guard if they were wearing a Gi, it isn’t the same in No-Gi. It can even be more challenging to finish submissions from the mount when training in No-Gi.

When it comes to competition, the rules for Gi and No-Gi are also a bit different. For instance, in IBJJF tournaments, heel hooks, and knee bars are banned, whereas in No-Gi tournaments like ADCC, they are allowed.

In general, the rules for Gi competition are usually more strict, and there are many things that you need to avoid, therefore, it is always better to go over the rules again before competing. 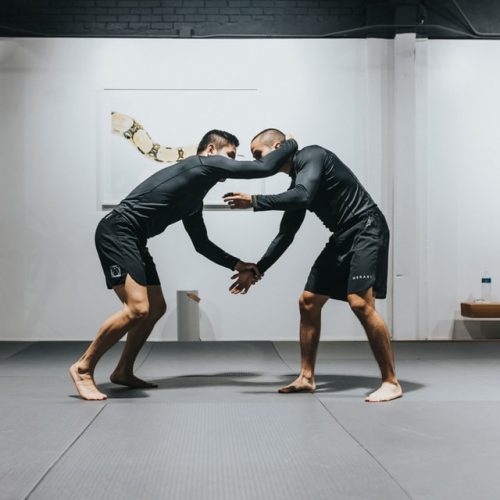 Is Gi or No-Gi BJJ better for self-defense?

Now let’s get to perhaps the most heated question in this Gi vs No-Gi debate, that is, which is better for self-defense. Well, though most people say that Gi is more practical for self-defense, I believe that training in No-Gi translates slightly better to a self-defense situation.

However, training in a Gi also has its advantages, the person you are trying to control in a self-defense situation is probably going to be wearing clothes, if you live in an area with cooler weathers, they are probably going to be wearing a jacket as well, and many grips that can be done on a Gi can also be done on any other Jacket (check out our review of the Best BJJ Gi in case you’re looking for a new on). Moreover, even if the aggressor is only wearing a t-shirt, even that can be used for control and submissions like the Ezekiel choke or baseball bat choke.

Still, the problem is that when people train with a Gi all the time, with other trained opponents, it becomes difficult to gauge the sporadic attacks of an untrained aggressor. This is where No-Gi is better, because you have trained at a higher pace, and perfected techniques that rent dependent on the clothing of your opponent.

No-Gi vs Gi for MMA – Which one is better?

When it comes to MMA, there is no doubt that No-Gi is the way to go. An MMA fight is going to be high-paced, and your opponent won’t be wearing a shirt that you can use for grips.

Moreover, in Gi Jiu-Jitsu, it is very common for fighters to pull guard in competition, because it is such a strong position with the grips the Gi provides, However when it comes to MMA, pulling guard is probably the worst idea because you are going to be berated with ground and pound from the top.

In No-Gi, the guard isn’t as strong of a position, therefore, most competitors pay more attention to wrestling and takedowns, which translates better to MMA.

Take Damien Maia for instance, he is a fifth-degree Black belt in BJJ and an undeniable legend of the sport, however, he frequently has difficulty taking opponents down, especially if they are good at wrestling. This doesn’t allow Maia to use his superior skills in MMA fights. This is very visible in the Kamaru Usman vs Damien Maia Fight back in 2018. Similarly, Brian Ortega, who is also a traditional BJJ practitioner, had a lot of trouble taking down Max Holloway in their fight.

This is because in traditional Jiu-Jitsu, with a Gi, there isn’t that much of a focus on Wrestling. On the other hand, BJJ systems the 10th planet, which focus on No-Gi, have MMA fighters like Tony Ferguson, who uses his Jiu-Jitsu very effectively.

Gi vs Nogi BJJ for Beginners – Which one should you learn?

Whether you are a beginner or have been training BJJ for some time, no one can definitively say that one form of training is better than the other. Both Gi and No-Gi are great for a beginner, and both have their advantages.

The decision to choose Gi or No-Gi as a permanent method of training should depend largely on your future goals, if you want to be an MMA fighter, you should focus more on No-Gi, whereas if you want to become a high-level Jiu-Jitsu competitor, No-Gi may be better for you.

However, the problem is that most beginners don’t really have an idea about their goals. Therefore I suggest that you should start with Gi because it is better for developing the fundamentals. In No-Gi, you can slip out of a bad position, whereas in Gi, you really have to work the technique and get the fundamentals down to escape bad positions and move to a better one. Training in a Gi also develops patience and allows you to strengthen your mental capacity for grappling.

Still, any beginner should try No-Gi once a week as well. Even one of the greatest grapplers in the world right now, who is known to even live in his Gi, has said that he trains No-Gi at least once a week.

Does Gi BJJ translate to No-Gi?

Whether you are training in a Gi or without one, it will improve your overall skills as a Jiu-Jitsu practitioner. However, when it comes to moving from one form of BJJ to the other, I believe that No-Gi translates better to Gi, rather than the other way around.

There are many high-level Gi practitioners that don’t know how to grip their hands properly in No-Gi because they always use grips on the Gi. Moreover, they find it difficult to take down opponents when they are training without a Gi.

On the other hand, when No-Gi practitioners move to the Gi, they can use the bulk of their skills without any problems. They are more agile and fast, however, they also have to face problems because of the grips their opponents may use.

Yes, Both Gi and No-Gi can help in improving your skills, and training No-Gi especially improves your grappling in the Gi.

It makes you quicker and allows you to become a better wrestler so that you don’t have to pull guard or try to pass your opponent’s guard in every fight.

Training without a Gi also makes you better at self-defense.

So, I believe that both forms of BJJ, whether it is in the Gi, or without it are very useful, and instead of getting into the debate of which one is better, you should try both for a while, and simply choose the one that is more fun for you.

Because above everything else, it is very important to have fun while training Jiu-Jitsu, especially when you are just starting out. After you have trained for a while, and know your goals, you can start favoring one over the other, depending on how you want to progress and compete.