Home » How to Keep the Stripes on a BJJ Belt 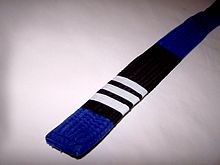 Let’s learn about how to keep those stripes on the belt and also look into how many kinds of belts are there in BJJ and what those stripes are for.

We’ll show you the top ways to keep your stripes on your belt, whether they fell off already, or are about to fall off.

Even if someone tells you that you shouldn’t care, for us each stripe represents a part of a journey and progress, with the beads of sweat and perseverance over time. They become a part of our Jiu Jitsu identity and hard work on the mats. What most people don’t get about the stripes on the belt is, it is not about the material; it is about what they represent.

So let’s keep ’em on for as long as possible!

To move on to the higher degree color, a practitioner commonly needs to earn 4 stripes on his/her current Belt until the Black belt. However, sometimes one can also be promoted to the next belt without actually having to get all 4 stripes first.

How these stripes will be given depends upon the instructor of the gym. Usually, each stripe is given based on skill, consistency level, attitude, and time spent on the existent belt.

Now, let’s talk about how a practitioner can keep his/her hard-earned stripes from falling off the Belt.

Keeping the Stripes on the Belt

Whether through a rigorous training session or the washing process, the stripes could fall off, unless some precautions are taken. Here are the methods of keeping them on the belt.

The first one is good old-fashioned sewing. You do not need to have legendary skills in the art of sewing. Decent sewing will do.

You can do double stitches to be sure. Sewing will make sure the stripes stay on even after the washing the belt regularly. This option is the most difficult though, unless you are a sewing expert.

We have all heard the phrase, stuck like super glue. Now super glue will come in handy in this situation.

Superglue is best for belt stripes which are about to fall off.

First, apply some superglue on the inner sticky side of the striping tape. Then wrap it slowly around your belt. After wrapping, softly press all over the stripe. Give it some time to stick and maybe blow a bit to help it dry.

Then, voila! It will work like a charm to keep the stripe(s) from falling off.

Check out this super glue from Amazon which we used for our belt stripes.

This may seem like an unusual way. BJJ finger tape is different from standard tape and usually used around your fingers.

However, BJJ finger tape is your best choice if your stripes already fell off, and if you are want to use those stripes for practice.

To make a stripe, wrap it around the belt twice. You need to be cautious that no air has entered while wrapping the belt. Cut the end of the tape on the seam of the belt. That should do the trick.

You have to be cautious while following this method. But it is one of the easiest methods.

Take a hot iron and press them all over the stripe tapes. And, after giving it some time, these should stick to the belt for a long time.

There are Five Primary belts for adults in BJJ. Each color represents the practitioner’s development through time. Let’s get right into those colors.

The white belt indicates the beginning of the journey in the path of BJJ. This means those who joined will get this belt despite having no experience or skill in this form of martial art.

This color is the second milestone in the journey. The Practitioner must be a minimum of 16 years old to achieve this belt. This is the belt earned by proving one’s worth on the mat and give some set of techniques a whirl about to see what works best for the practitioner.

This color often requires the longest time before reaching the Black belt level, unless you are BJ Penn who reached it in just 3 years!

At this level, the practitioner is expected to have several techniques to go to and use them as per their game plan.

This is the Belt that indicates the practitioner has achieved the prominence in tactical, technical, and mental insights of the art.

This is the highest order in the primary color of belts. From here on, some other colors of belts indicate the ‘Masters’ and the ‘Grandmasters’.

After the Black belt, there is a Red and Black(coral) belt and those who have made a mighty impression on the world of BJJ and they are called the ‘Masters’. When the black belt practitioner moves up to a seventh degree, they are awarded this belt.

When the practitioner gains the eighth level, they are given the Red and White Belt.

The Red Belt is the highest order in the BJJ and only reserved for those who have achieved the zenith of the art. They are called ‘The Grandmaster’.

The BJJ Belts need to be cleaned frequently as the sweats and dirt may pose a hygiene problem. With the methods mentioned above, you can easily keep the stripes from falling off, even with all the washing and training. Happy rolling!