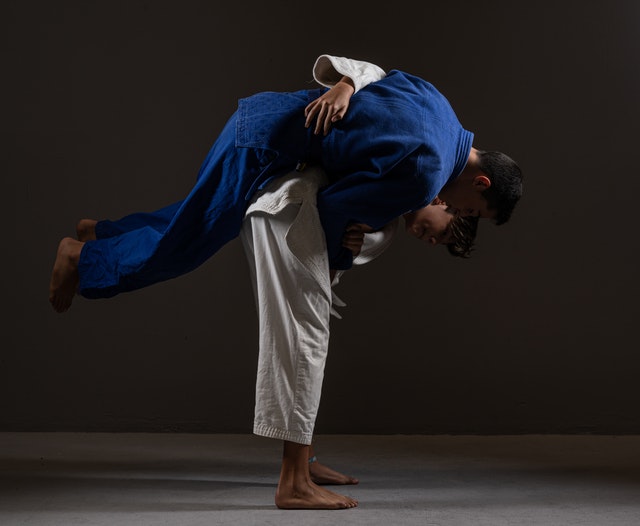 Want to know which takedowns you should learn as a BJJ beginner?

Don’t get left behind and improve your overall game by learning a few important takedowns such as the double-leg or single-leg takedown.

A common trend with many BJJ practitioners is that they aren’t that good at takedowns. The thing is that when practicing Jiu-Jitsu, and rolling, many people just pull guard, therefore their takedown game isn’t as refined as it should be.

When such BJJ practitioners try to transition into MMA or have to grapple against a wrestler, they can have problems.

So, it is absolutely essential to have some good takedowns in your arsenal.

Yeah, I get that you can pull guard in sport BJJ competition, but you can’t forget that at the end of the day, BJJ is a martial art, which means we have to consider the self-defense aspects of what we’re doing as well.

I’m pretty sure you wouldn’t want to pull guard in a street fight, or an MMA fight.

So, in this post you are going to learn about the best takedowns that every beginner should learn and practice.

So, here are some of the top takedowns that you should practice as a beginner.

If you do any form of grappling, you have probably seen the double leg takedown. It is the first takedown you learn in any wrestling school, yet it is the most effective takedown at the highest level of the sport.

It is prominent in BJJ, all wrestling styles, Sambo and MMA, however, Judo doesn’t allow it for some useless reason (to their own loss, I might add)

Though it may seem like a brute force football tackle in hindsight, there are many technical intricacies to the double leg takedown.

Firstly, you can’t shoot a double-leg takedown if you are afraid of commitment. You need to be quick and set up the takedown to get to your opponent’s legs before they sprawl.

Secondly, it is important to shoot the double leg from the right distance. The general rule is, only shoot for a double leg if you can touch your opponent.

Moreover, there are many variations of the couple’s leg, largely depending on your head position. Which can be on the side or in the chest. To complete the takedown, you can either drive through your opponent, or cut an angle, and drop them to the side.

The single-leg is another standard takedown that is very important in wrestling and BJJ. As the name suggests, all you have to do is reach down and grab one leg of your opponent, which is usually the lead leg, since it is closer.

After that, there are loads of different ways to finish the single leg, you can run the pipe, trip the other leg and do a lot of other variations to make your opponent hit the mat.

Single legs are also a great way to chain takedowns, which is essential at the highest level of the sport. Single legs can create openings for other takedowns like double legs and high crotches. Khabib Nurmgomedov was especially good at chaining takedowns, in multiple fights, he shot a low single from his own side, and chained multiple techniques to get the takedown. The initial grappling exchange in the McGregor fight is a great example of this.

Though a low single is still a single leg, its mechanics are quite different you have to shoot very low on your opponent’s lead leg and grab their ankle. After that, depending on your opponent’s reaction, there are many ways to finish the takedown.

However, there are some things that you need to be aware of while trying a low single. Firstly, you should ideally spend as little time as possible on your knees, this is because when you are hitting a low single, you may save yourself from a guillotine, but it is possible to expose your back.

Low singles can be shot from a longer distance than traditional single legs. And many fighters use them regularly, take Khabib Nurmagomedov for example, in both the Aquinta and Mcgreggar fight, he got the first takedown after shooting a low single from the outside.

The hip throw is one of the first techniques taught in Judo, and it is very effective, especially in BJJ, where you and your opponent are eating a Gi. It is also a good technique in No-gi, but without the proper grips, it can be a little challenging to execute.  O-Goshi roughly translates to the “big hip throw”, and though this name may have you think that it is a massive slam, however, done right, it is actually one of the most controlled takedowns in grappling. Therefore, it is perfect for beginners.

There are several easy to initiate this takedown, however, the simplest way is to utilize an under hook. If you are training in a gi, you can also grab your opponent’s belt from the back. Whereas the other hand maintains a grip on your opponent’s wrist or sleeve.

The Ankle pick is another excellent low-risk takedown that can be very effective, and if you land it, you end up in a very favorable position to pass guard.

When you land the takedown, you already have a grip on your opponent’s ankle, which allows you to easily transition into different guard passes.

The ankle pick has been used multiple times by Tony Ferguson, and Danier Cormier also used it to take down dark lewis in his heavyweight title defense.

The Front Headlock Snap Down

The front headlock is a very common position that you may end up in during a BJJ match. Most practitioners will pull guard when they have a front headlock and try to get a guillotine, however, if you use the snap-down, you can stay on top, and avoid taking any risks.

When you have the front headlock, you need to make sure that you maintain shoulder pressure on your opponent, making them carry as much of your weight as possible. Then, you need to fall to your knees and snap your opponent down with you.

They will end up in a turtle position, and from here you have a lot of transitions depending on your opponent’s response. You can take the back for points, and even string together submissions like the guillotine, Anaconda, and dance to get a high percentage finish.

The Arm Drag to an Inside Trip

This is perhaps one of the easiest takedowns to land in a BJJ match, and it is especially effective against larger and stronger opponents. Though it is effective in freestyle wrestling and MMA, it becomes a lot easier in BJJ, since you can grab your opponent’s sleeve to get a more effective arm drag.

Remember to throw your weight towards your opponent to off-balance them and secure the takedown.

When you land this takedown, you will probably end up in half guard, which is easier to pass an attack from.

Tomoe Nage is a Judo takedown also known as the sacrifice throw. It is named so because you temporarily put yourself under your opponent before throwing them over you.

In hindsight, this may sound like a bad idea, but when executed properly, the sacrifice actually allows you to generate a lot of momentum and get  deep under your opponent’s center of gravity.

The Tomoe Nage is especially useful in BJJ, because you have the right grips to execute the technique, and even if you mess up, you end up in guard. Therefore, this is a great technique for competition, however, in a self-defense situation it isn’t that suitable.

Practicing takedowns is very important in BJJ, especially if you want to be effective in self-defense, and maybe want to transition into MMA. Even if you are transitioning from Gi to No-Gi, takedowns become more important, since positions like bottom guard become more expensive.

Moreover, it is quite simple. If you don’t incorporate takedowns into your training, you will always be a step behind the competition.